The Smart CSOs model: A tool for better conversations on systems change

The questions at the core of the Smart CSOs model are: How do systems change? And what does existing knowledge tell us about how our broken economic, political and social systems could be fundamentally transformed so that life on earth can flourish within the means of the planet?

This model aims to help activists to have better strategic conversations focusing on new system change strategies and how they can mutually reinforce one another. It is based on empirical findings from fields of research. 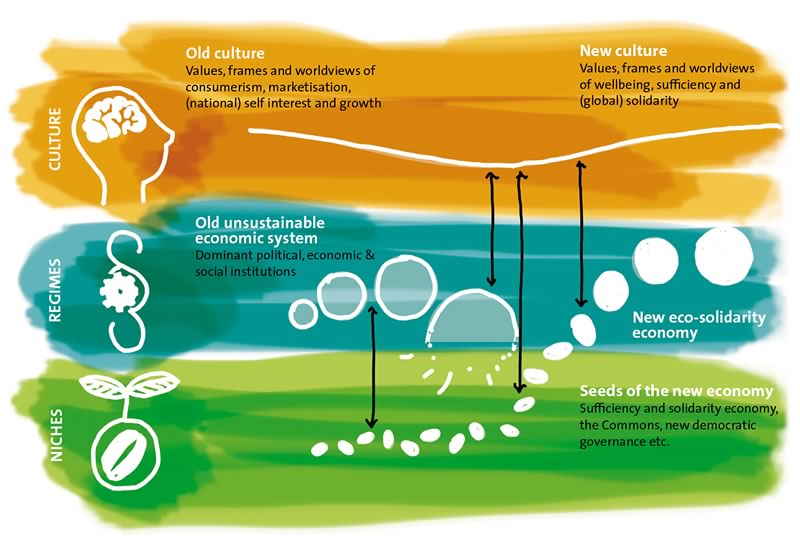 We need a broader perspective about how change happens

We know from political sciences that it is very difficult to change institutions. They resist change very strongly and often self-stabilise when being pushed to change. We need a much broader perspective on change that involves an understanding of the role of culture and radical innovation processes in catalysing change. We need to become skilled at identifying and making use of meaningful windows of opportunity for change in the old system.

Activists need to learn how to shift societal values and frames

Research from social psychology and cognitive linguistics shows the importance of values and frames in political motivation and thinking. Civil society campaigns and political communication relies too much on the power of the rational argument instead of communicating on the basis of values.

Disruptive innovators creating the seeds of the new system require support and protected spaces to incubate their innovations. Innovation and transition studies show that If we can support these pioneers by helping them build communities of influence, they will become stronger, scale their innovations and eventually institutionalise a new system.

System change is resisted by institutions that defend and often abuse their excessive and uncontrolled power. As long as groups with an interest in the status quo continue to effectively control the system, system change pioneers will be unable to institutionalise new economic models. Campaigns of protest and resistance are necessary strategies in any system change portfolio.

For a successful Great Transition we need to make change efforts at all three levels that reinforce one another to create positive feedback loops. The strategic question here should always be: What effect could my action have on any of the levels and what feedback loops could it catalyse?